Summer fieldwork targeting the health of B.C. kelp forests will carry on despite the global pandemic now that SFU researchers and partner First Nations groups have an alternative plan —tapping the benefits of citizen science.

Co-led by professor Anne Salomon and postdoctoral fellow Danielle Denley of SFU’s School of Resource and Environmental Management (REM), the researchers are investigating the spread and prevalence of kelp-encrusting bryozoan in partnership with four Central Coast First Nations. Bryozoan causes kelp to decay, lose buoyancy and sink beneath the surface away from the sunlight it needs to survive.

Under their new arrangement, researchers will provide virtual training to teach the First Nation’s Coastal Guardian Watchmen how to collect field data related to bryozoan cover on kelp. They will also be trained in monitoring protocols for measuring bryozoan on kelp using an app, which allows for data to be captured and shared remotely with the research team.

As well, the entire community will participate in citizen science—which involves sharing data collected by the general public— by taking photographs of kelp while they are out harvesting this and other important marine resources.

An online community survey will replace in-person interviews asking the Nations to share their traditional knowledge and memories of when they first noticed bryozoan appearing on kelp in the area.

“It's definitely inspiring to see these communities working together and wanting to do something positive for a resource we all care so much about, despite COVID-19,” says Salomon. 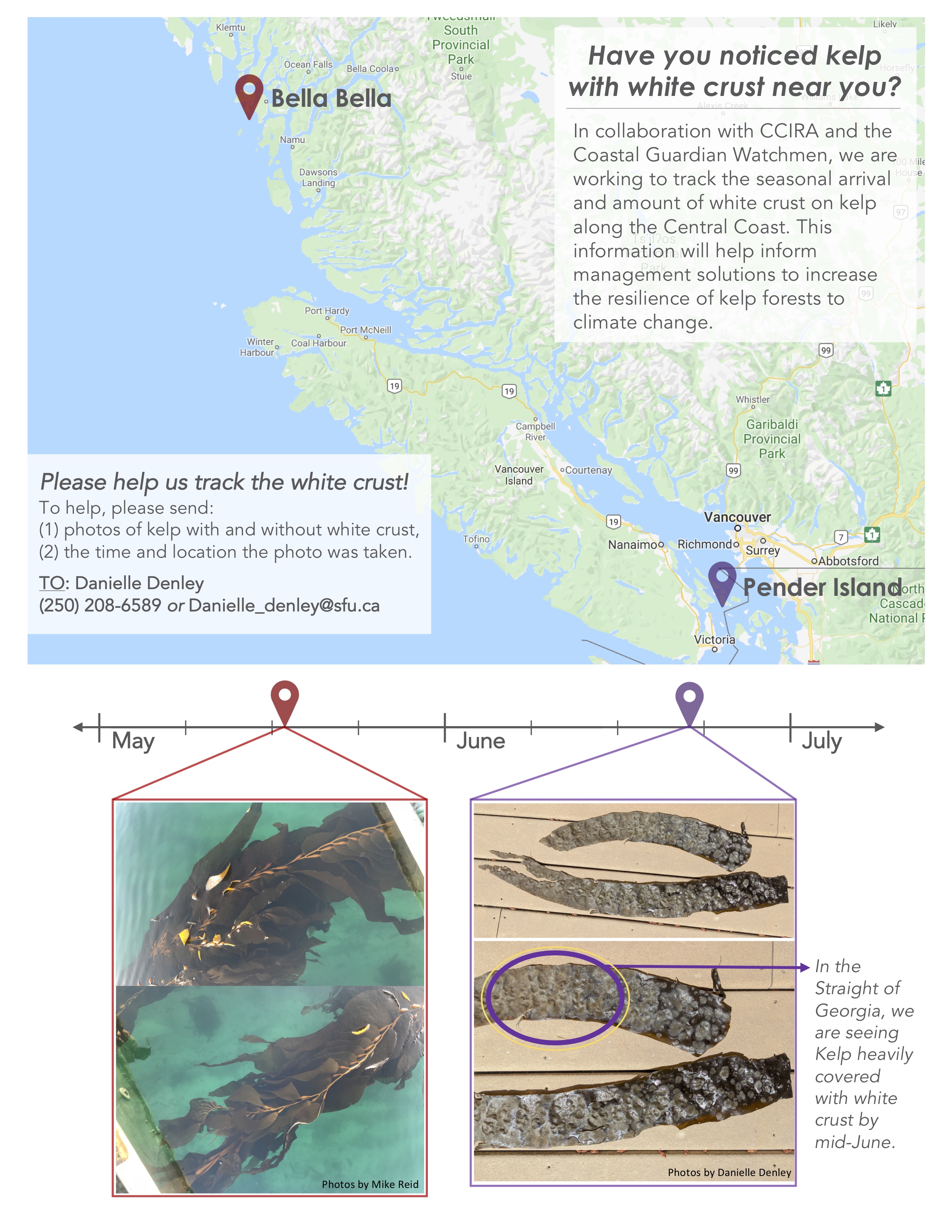 The idea for this study came to Salomon when she received a photo and query via text from one of the Coastal Guardian Watchmen during the during the 2014 to 2015 marine heatwave along the B.C. coast. The photo revealed kelp covered in an abnormal amount of bryozoan, which appears as a white crust. Serendipitously, Denley, a doctoral student at the time specializing in this bryozoan, contacted Salomon about a potential postdoc. “The Watchmen had observed and identified a problem that needed research and some solutions.”

Kelp forests provide vital habitat for organisms, such as food for fish and shellfish. These aquatic plants also sequester carbon to fight ocean acidification, help to reduce coastal erosion caused by wave action and are a crucial resource for Indigenous communities for the traditional herring spawn-on-kelp fishery.

Salomon has been working with the Central Coast First Nations for a decade and says their willingness and eagerness to innovate speaks to the long-standing, trust-based relationships that have been built over time.

“It's been pretty special to have them trust us with this work because it's a big ask, costing money and people's time,” she says. “It's a reciprocal gift, this respect and trust we have for each other and the natural world that we care so much about. What's brought us together is this passion for caring for this natural world that we love.”

The research team also includes master’s student Meredith Fraser, who created outreach materials on how to collect data and a short video to encourage community members to take and share photos of kelp with the research team. Meredith’s project would have involved caging kelp samples in the field, along with the marine animal grazers that feed on kelp with and without bryozoan in varying water temperatures. The team hopes to replicate the field project in the lab at the Bamfield Marine Sciences Centre on Vancouver Island in August.

The sea water tables at Bamfield allow for controlled changes in water temperature to study the effects of these variables on the kelp. Fraser will incorporate input from the community survey to determine the type and quantity of grazers, such as urchins, snails and crabs, to recreate conditions found in the natural marine environment.

“This project will provide a clear picture of what will happen to kelp during future marine heatwave events, which are expected to become more frequent due to climate change,” says Fraser.

This Latest News update is courtesy of an article written by SFU News.

To take the Northwest Passage

A greener future for existing buildings beyond the wrecker’s ball

How can we make the most of existing commercial buildings while maximizing their value and reducing greenhouse gas emissions?

Congratulations to 2022 Award for Leadership in Engaged Research recipients

UVic’s Renewable Energy Club competed in the finals of the US Energy Department’s Solar Decathlon – with a little help from PICS.

Do you have a high-impact climate solutions research project? PICS’ OPP may be for you