Two specialist reports released by PICS and the Pembina Institute in 2014 and 2017 put the spotlight on proposed liquefied natural gas (LNG) export projects in British Columbia, crunching the numbers on the potential climate impact, and analyzing its often-touted claim of it being a transitional fuel to a renewable energy future.

There are no LNG export projects operational in British Columbia, but two are well advanced: the $40-billion LNG Canada project in Kitimat which received final investor approval to proceed in November 2018, and the Woodfibre LNG Project, a small-scale processing and export facility southwest of Squamish.  Other LNG facility applications are also listed by the BC Oil and Gas Commission.

The 2017 study found that LNG Canada and Woodfibre LNG projects would together increase carbon pollution by 9.1 Mt CO2e/year by 2030, further increasing to 10.2 Mt CO2e/year by 2050. This would put BC’s legislated target of annual GHG emissions dropping to 12.6 Mt CO2e by 2050 essentially out of reach, since it would allow less than 3 Mt CO2e/year for the rest of BC’s economy.

Full clean electrification of both projects’ LNG terminals, however, would improve the numbers. Most emissions (not counting those from the eventual combustion of the natural gas) come from the terminal’s power processes including the non-compression load (i.e. the power needed for pumps, air coolers, lighting, and space heating) and the main gas compression load (i.e. the power needed for the main liquefaction process).

Researchers found that LNG project terminals fully powered by natural gas are 3.9 times more polluting per tonne of LNG produced than the cleanest LNG terminal (Woodfibre LNG) proposed for BC, as shown in Figure 2. Woodfibre plans to use only hydroelectricity for its power while LNG Canada proposes to use a mix of natural gas turbines for compression load and hydro grid electricity for non-compression load. 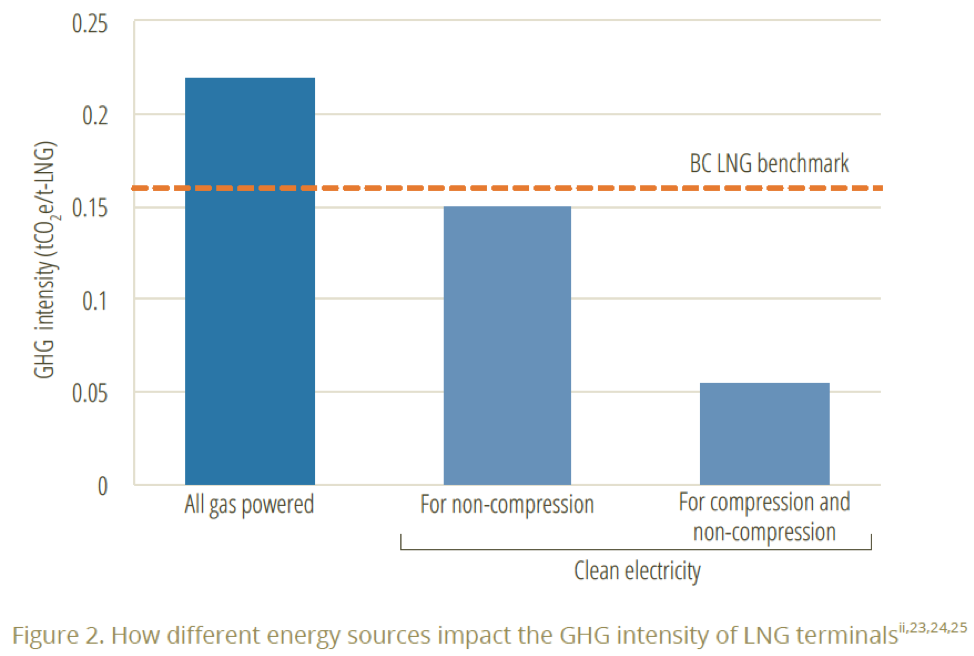 Subsequent to this PICS-Pembina report has been the release of the BC Government’s CleanBC plan in December 2018, with a commitment to reduce GHG emissions from LNG development through measures including the use of clean energy.

“More reductions from LNG’s climate impact will be achieved through investments in electrification of upstream oil and gas production so extraction and processing are powered by electricity, instead of burning fossil fuels.” CleanBC

A separate combined research effort into the global context of BC LNG examined the popular claim that LNG would help address climate change by displacing more polluting fuels such as coal and oil. For the same amount of energy, natural gas releases about 24% less carbon pollution compared to oil, and 46% less compared to coal. However, in a report released in 2014, the researchers found that without stronger international policies that limit carbon, demand for coal, oil and natural gas could continue to increase, thereby worsening, not addressing, climate change.