The growth rates of black spruce trees across Canada have almost doubled over the 20th century and environmental change driven by human activities is the cause, according to research supported by the Pacific Institute for Climate Solutions (PICS).

This study investigated whether the growth rate of black spruce, one of Canada’s most common tree species, has changed across the boreal forests which stretch coast-to-coast from British Columbia to Newfoundland & Labrador. Timber supply and the ability of forests to store carbon (i.e. carbon sinks) are intrinsically linked to how fast trees grow.

A team led by Dr. Robbie Hember, a forest carbon modeller with the BC government and member of the PICS Forest Carbon Management Project, analyzed the rings of dominant black spruce trees that were cored at 248 plots across Canada. The tree cores had been collected during the early 2000’s at field plots within the Boreal Cordillera, Boreal Plain and Boreal Shield ecozones, and processed as part of Canada’s National Forest Inventory.

When Hember’s team compared rates of tree development with calendar years, they found a stunning 154—321 percent increase in the growth rate of dominant individual trees between 1901 and 2001.

But there is a twist. Dr. Hember said part of the trend has very likely arisen from the decision to core dominant trees only, as well as limitations in their ability to measure past tree growth. 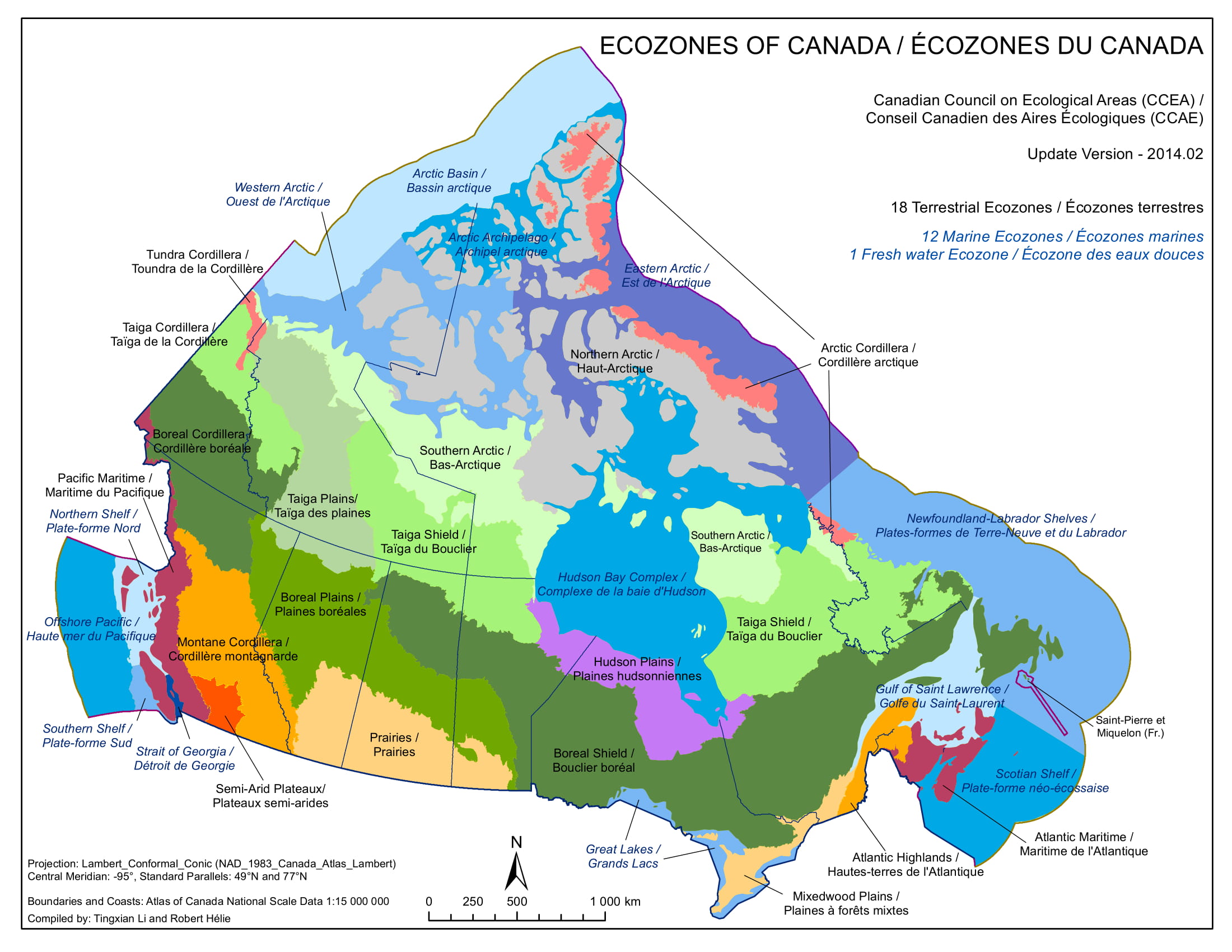 To understand how these factors affected their results, the researchers ran a computer simulation model that predicted how non-dominant tree grow, to gain insight into the growth rates of entire forest stands. They programmed a hypothetical increase in tree growth. Then they compared the corresponding change in growth for all trees in the stand with the change in growth of just the dominant trees. This allowed them to infer how much of the observed trend could be attributed to artefacts of the sampling design.

The model simulations also proved vital in understanding what a trend in growth of dominant trees really means in a practical sense.

“Not surprisingly, we found that various negative feedback mechanisms diminished the magnitude of growth enhancement as we shifted from looking at the scale of dominant individual trees, to looking at the scale of entire forest landscapes. After accounting for these feedbacks, we calculated that the average growth rate of black spruce trees likely increased by somewhere between 45 and 80% between 1901 and 2001. So even though tree rings provide a really valuable glimpse into the past, it’s really easy for the findings to be misinterpreted,” said Hember. 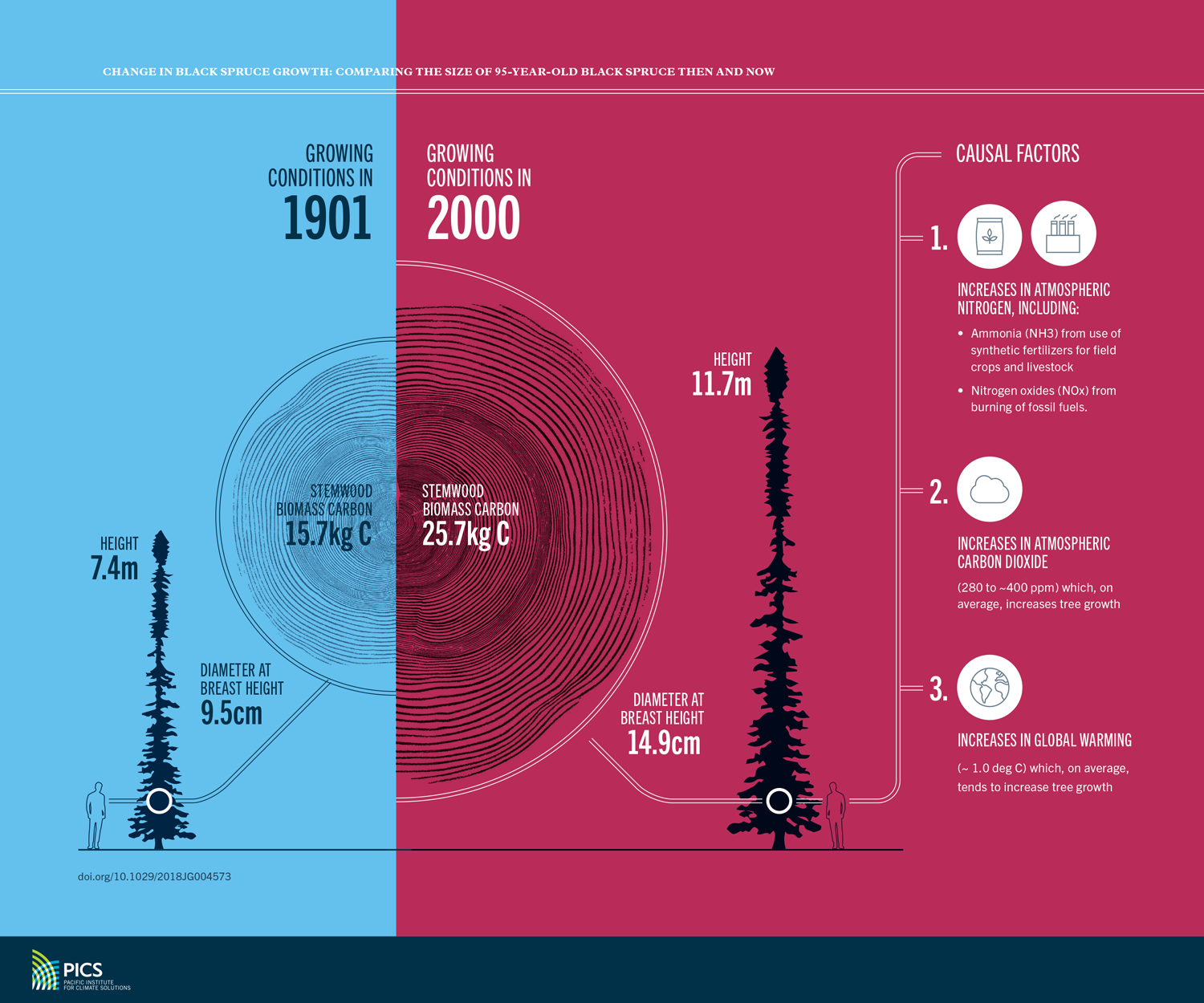 Getting the Big Picture

Evidence that tree growth increased over the 20th-century reinforces the common assumption in carbon cycle science that humans have inadvertently improved the growing conditions for plants by increasing reactive nitrogen, atmospheric carbon dioxide and air temperature levels. Activities that drive this include fossil fuel combustion, fertilizer application, and livestock production.

The magnitude of growth enhancement (45 to 80%) is comparable to findings for other forested regions, including Austria, Canada's west coast, Finland, Germany, Japan, Sweden, and the United States. And although faster tree growth today benefits many of the values we place on boreal forests, including timber supply and climate change mitigation, it may also translate into greater responsibility to manage forests before they burn in extreme wildfires, which are more frequent due to climate change.

As the carbon sink associated with the increase in growth of black spruce trees pales in comparison with the amount of carbon humans emit to the atmosphere through use of fossil fuels, it does not relinquish us of our responsibility to transition to renewable sources of energy, says Dr. Hember.