Scientists are certain the oceans will rise up. But they’re unsure when, and by how much. Artificial intelligence could help inform the picture.

The trouble with sea-level rise is that its worst impacts have always been too far off in the future to gain the attention it really deserves. Aside from the occasional news article about seawater creeping into low-lying coastal communities, inundation rarely gains the headlines it arguably should. But then there was the summer of 2019.

In June and July, unusually warm air settled over Greenland’s ice cap—yielding near-viral footage of a dramatic melting event. Suddenly the whole world was paying attention. Fortunately, Jackie Yip was several years ahead of the curve.

In fall 2018, the UBC PICS Fellow defended her PhD with UBC’s Institute for Resources, Environment, and Sustainability on a new approach to account for the uncertainty bedeviling sea-level rise projections and local-level societal impacts.

Scientists know that melting ice caps—such as the one covering Greenland—will impact coastal cities sometime this century, but are less certain on when it will happen, and how much. (The 2019 Greenland event contributed just a millimetre or so.) Add in local X-factors such as changes in land use, topography, population density, and the distribution of businesses and services, and the picture gets fuzzy in a hurry.

“There is a wide range of projections on how much the oceans will rise,” says Yip. In fact, in recent years years, the range of sea-level rise project for the timeframe year 2100 ranges from one meter to as much as four meters, Yip’s paper notes. That’s why, she says, “we’re trying to change the way we think about planning for the future.”

The usual long-term planning approach takes the so-called “best” prediction and identifies the cheapest and highest benefit option. Yip instead used Self Organizing Maps, a machine-learning algorithm, to help the City of Vancouver understand how sea-level rise impacts could unfold across a wide range of futures, and ultimately help find adaptation options more tolerant to changing projections of sea level. Yip modelled 14 potential flood impacts including direct impacts (e.g., building damage) and indirect impacts (e.g., sewage backup and disruptions to businesses, hospitals, and transportation systems). She modelled the spatial distribution of these impacts both within and beyond the area directly inundated.

“This machine-learning algorithm allows the impacts across a wide range of future scenarios to be shown as a concise set of spatial maps that are understandable by different stakeholders, so it can be a great platform to develop a shared understanding of the risk” she says.

Yip modelled the spatial distribution of a range of impacts of potential sea level rise in Metro Vancouver, and shared them with stakeholders in a late-2017 workshop.

Yip has since joined an engineering firm, focusing on municipal sea-level rise adaptation planning, and recently accepted a position as a coastal risk scientist with Natural Resources Canada. Her PICS research was carried out under the supervision of UBC Professor Stephanie Chang. 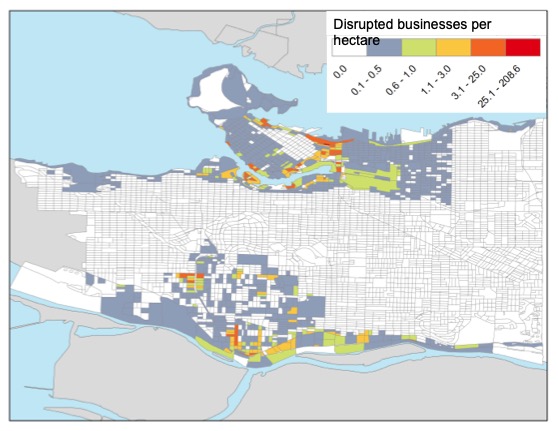 Figure 1 shows one out of 16 robust impact patterns of tertiary sector business disruption (i.e., the number of businesses that may experience temporary closure due to building damage and/or power outage). This specific pattern is associated with scenarios of 2-3m of sea-level rise. By comparing the spatial distribution of disruptions with the inundated areas associated with the 2m sea-level rise scenario (Figure 2), one can see that businesses located beyond the inundated areas can also be affected due to potential power outage induced by flooding of major power distribution assets. 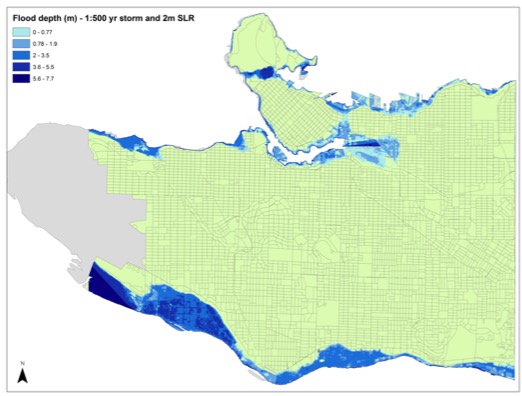